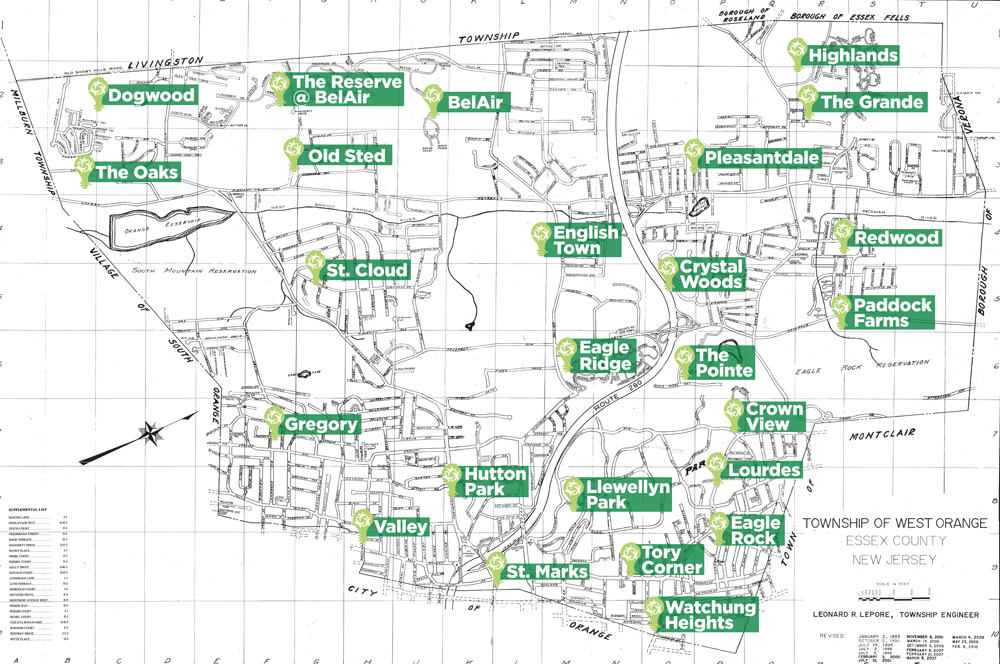 This section can trace its early development to 1908 when the Hudson Tubes now known as PATH first opened. It provided greater access to the Lackawanna Railroad and since Mountain Station in South Orange was the first stop in a suburban setting it enabled families from New York to settle in and around Gregory Avenue.

In 1820 a mineral spring was discovered on this property and the Orange Springs Hotel was erected and developed into a resort. In 1887 the Essex County Country Club was formed and constructed their first golf course here in 1898 before relocating to their Prospect Avenue location in 1918.

First sections founded by Llewellyn Haskell beginning in 1854 whose vision for preserving the natural beauty of the Orange Mountains resulted in what is considered to be the first gated community in the United States.

First settled by Samuel Condit in 1720. References to Pleasantdale first appeared in a diary kept by his granddaughter living there in 1772 making this the oldest section name in current day West Orange.

Originally founded by Benjamin Small who began building small cottages here in the 1860s. The development was named by Small's wife because the area reminded her of a Paris, France suburb by the same name.

Sections of this church was originally constructed in 1827 with stone quarried from Shrump's Quarry in Pleasantdale and remains today as West Orange's oldest standing landmark.

Often refereed to historically as the Orange Valley is the area bordering Orange. Beginning in the 1850s it became a center for hat manufacturing and at one time was home to 29 hat factories in the surrounding vicinity.

Originally named Williamsville after the Williams family who were the first to settle in the area. They were Tories who were loyal to the British Crown during the American Revolution and gathered near these crossroads which has since been known as Tory Corner.

Founded by Waston Whittlesey beginning in 1894 with 1103 building lots. The successful development of the area was aided by the Eagle Rock trolley line that ran through the property until 1924.